Okay, is it wrong to say this viral break up text made my day? My sense of humor might be a little warped, but this speaks to me. At first I thought it was funny, but, then I realized I’m pretty sure I dated a guy like this once . 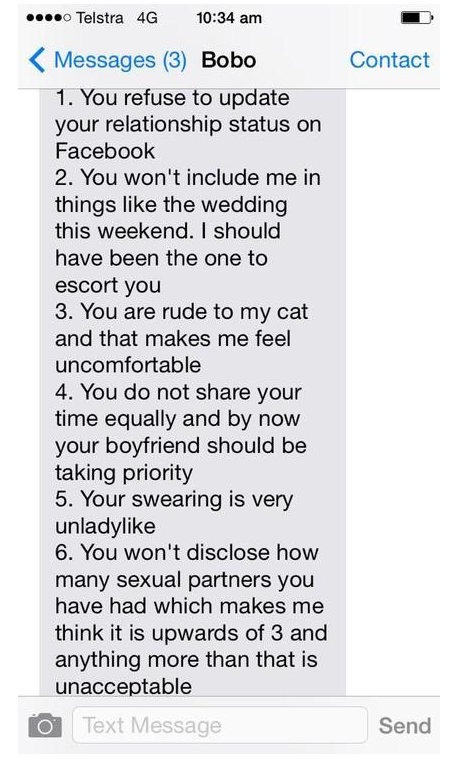 but in my day break ups were done face-to-face, over the telephone, or at the very least, by snail mail.

I’m not a cat lady, per se, but if someone didn’t bond with say, my puppy, should I actually have one, that might make me question the  relationship too. Then again, I read that she was allergic to the cat. So she’s got a free pass right there.

Clearly she wasn’t completely sold on this guy, which would explain not including him in her weekend wedding plans or Facebook relationship status.

However, maybe he could learn a thing or two from all of this. Let’s call a spade a spade, he seems a little controlling. Perhaps, even a little needy, though that’s not always a bad thing. I would take needy over aloof any day! And from the article she says he’s kinda nerdy, again, not a deal breaker for me.

However, as for the demand to know the number of male suitors who’ve enjoyed her bed, well, it’s really none of his business, I guess. Truth be told he seems extremely judgmental and ready to make her wear the Scarlet Letter, so I can see why she didn’t feel safe in sharing.

Regarding her swearing? Unless she’s dropping F-bombs all the time, an occasional and well-timed expletive is not a bad thing. So, “F” that.

Apparently she did not respond to his text, because really, where do you go from here?

Please share your awkward break up stories with me.