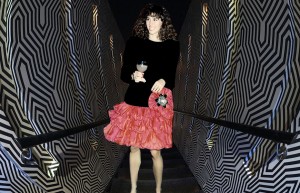 I cringe at the thought of my first (and only) date with Mr. Handsome. I had a HUGE crush on him and his chiseled features for years. He was several years older, so naturally, I wanted to wear something special. That was my first mistake.

I wore black satin puffy gauchos with gold flecks that caught the light it such a way it could blind you, like the sun, if you stared directly at it. To complete the look, I wore the matching fitted jacket, because nothing says sexy better than looking half matador/half court jester. The cherry on the icing was the pair of shoulder pads that made me resemble an NFL linebacker. The only thing wider was my hair. I thought I looked, like totally, cool. I shudder at the memory.

Even though he kissed me at the end of our date (actually, it was more like a hit and run), he never called again. Was I just too young or did the fact I had broader shoulders scare him away? I will never know.

When I look back on my years in high school, there were those girls who didn’t succumb to the latest fashion trend. They had long, smooth, shiny hair and wore simple body-skimming wrap dresses with nary a should pad in site. They had style and classic beauty and wouldn’t have been caught dead in a pair of jodhpurs.

I, on the other hand, would wear the latest fad no matter how big, puffy, neon, shiny or unflattering. The glitzier the better. My hair was thick, kinky and curly, and wouldn’t know a modicum of control until decades later, when women would start to use nuclear strength varnish to tame their mane. I was under the false impression that once I got rid of the braces and the training bra I was home free. What did I know?! Admittedly, it was not my best look.

You think I would have learned something from the many fashion mistakes of my teen years. But, sadly not. Decades would pass before I would even have an inkling that some of my choices in clothes were less than awesome.

In fact, there was a little black velvet number with a fuchsia ruffle that Carmen Miranda would have killed for, that I just had to have for my engagement party. Did I mention the giant flower the size of a Thanksgiving turkey flanking my hip? Oh yes,  I was a show-stopper that night -probably a traffic stopper too. Blame it on youth.

It’s good to know I have learned a thing or two over the years. I no longer wear anything puffy or with shoulder pads or that could double as reflective safety apparel. According to my teenage daughter, I play it too safe. I say, better safe than sorry. Been there, worn that – I have the photos to prove it.