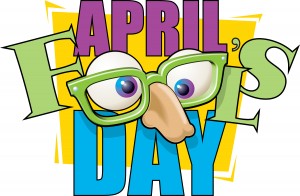 How far is too far for an April Fool’s Day joke? It’s all supposed to be a day filled with practical jokes and hoaxes and silliness. Until, it’s not.

Years ago, on April Fool’s Day, I told my mom I was getting engaged to someone I had recently started dating. My acting must have been pretty good because she actually bought it and, worse yet, I let the prank go on ALL day. Boy was she furious when I told her it was a joke at the end of the night.

How many women tease their husbands today with “I’m pregnant” or a husband to his wife “I got fired” (hmm…not so funny). I’m pretty sure over the years my husband got used to the “pregnant routine”, though I’ll never forget the first time I said it, when he held my gaze for a moment – all the air sucked out of the room – and nervously asked “April Fool’s, right?”

That man knows me!

Now all my April Fool’s Day pranks fall on dead ears and an eye-roll, but you can’t blame me for trying. I’ve been doing this for years. It’s in my blood.

When I was a young girl, my brother, sister and I, would love to tell our dad – with mock horror and chocolate milk smeared faces – there was a three-headed elephant in his car, and then we’d sing “There’s a three-headed elephant in daddy’s car, April Fools, April Fools” as we followed him to his car to have a look see. Then we would inform our mom that school was cancelled for the day and spiders were swimming in our cereal. (She didn’t buy that either.) The entire day would be filled with silliness. It’s still in me, folks.

The real zinger on April Fool’s Day is that it’s also the day many colleges send out their admissions decisions. What kind of sick joke is that?!

I have one friend, whose clever child told her mom she got into the college of her choice, and her mom – loaded with excitement and quick fingers – shot off an email to friends sharing the good news. Whoops! The second email that followed was one for the books. (As luck would have it her daughter did end up getting into an even better school later on. Ha!)

Where did April Fool’s Day come from you ask? Good question. Hope you’re sitting down.

According to Wikipedia: “In the Middle Ages, up until the late 18th century, New Year’s Day was celebrated on March 25 (Feast of the Annunciation) in most European towns. In some areas of France, New Year’s was a week-long holiday ending on April 1. Many writers suggest that April Fools originated because those who celebrated on January 1 made fun of those who celebrated on other dates. The use of January 1 as New Year’s Day was common in France by the mid-16th century, and this date was adopted officially in 1564 by the Edict of Roussillon.”

Examples of early pranks: “In 1539, Flemish poet Eduard de Dene wrote of a nobleman who sent his servants on foolish errands on April 1.” And, “On April 1, 1698, several people were tricked into going to the Tower of London to “see the Lions washed”. Clever ones, those guys.

So, tell me, have you pulled any pranks today?