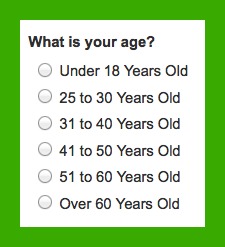 I was at a dinner party recently, chatting up a small group of men and women, all of us around the same age, when someone made a joke about aging. My ears perked and I blurted that I had turned The Big 5-O.

They were stunned. Sadly, not for the reason I had hoped. A “No way! Seriously? I thought you were 35!” would have been nice, (a girl can dream…), but what I heard was equally shocking.

One of the men leaned in, like talking to a naive child, and said, “You should never EVER share your age.” The rest agreed. My first thought was to blame it on the wine, though my glass was full, or claim to have holiday-seasonal-social Tourette’s. (I have used this tactic before. Successfully.) I smiled. My lip twitched.

Apparently, aging is a bad thing. Admitting it is even worse.

Anyone can tell from looking at me in my party dress that I didn’t just come from prom, but putting a number on it is like the kiss of death. People know you’re older than 40, they just don’t want to know by how much.

When told she didn’t look her age, Gloria Steinem declared, “This is what forty looks like!”

Aging, for most women, is a liability after a certain point. Our wisdom is valued, sadly, the rings around our tree-trunks are not. Men get more distinguished looking and we become, well, crones. Just look at Hollywood to see how this plays out. Women fight aging so hard that most of the women over 40 or 50 don’t look like they age at all. In fact, I’m quite sure JLo is going backwards. It’s just not fair.

Being told you look good for your age is like getting kissed and slapped at the same time. (If you are a fan of Fifty Shades of Grey, you might like this.) Let it sink in a moment – you’re getting complimented that you don’t look old, because, let’s face it – you are.

Aging gracefully is my goal. Besides, I’m scared of knives and I’d rather save my money for sushi and wine and nice handbags. The best thing I do to fight looking “old” is dying my hair -without it I would look like Cruella Deville. Avoiding being seen in direct sunlight is also a good strategy, but hard to pull off. Walking fast enough to create a blur works too. It’s all smoke and mirrors, baby.

[Tweet “You are denying your very existence by trying to lie about your age. – Oprah Winfrey”]

I’m not going to lie and tell you that turning 50 was easy, it wasn’t. At least not at first. I dreaded it like I dread flying on airplanes. Waking up in a panic everyday for the month before the big launch day arrives. My reaction surprised me. For years I thought I would ring in my 50th year with great fan fare, or at least a disco ball.

Leaving my 40’s felt like I was losing something I once had, or, more closely, like falling off a cliff.  All of a sudden any double-digit number beginning with a 4 or less seemed young. So incredibly young. Almost infantile. But then my birthday passed. And within a month or so I forgot that I was half-a-century year old. Or that I am supposed to become invisible to men. (FYI, that didn’t happen. I hope it never does.)

“It would help not to treat age as if it were any less of a pleasure than it was when were six and saying, ‘I’m six and a half.’ We could be saying, ‘I’m fifty and a half’ and say it with joy.” – Gloria Steinem

I was thrilled when I heard the next Bond Girl is Italian beauty, Monica Bellucci, who also happens to be -wait for it- 50! The internet was flooded with posts from the media, clearly the producers of the sexy Bond adventure had lost their mind when they cast a mature woman in a role that has always been filled by young smooth-skinned nubile creatures. Every tweet or Facebook status dying to know if we thought Ms. Bellucci was too old to be considered sexy?

I mean, really, 50 and sexy, is that even possible?

When I asked my Facebook friends to share their thoughts, a few said Monica Bellucci and Daniel Craig were both too old. In my humble opinion, I think they should get their eyesight checked. To me, sexy doesn’t look just one way. It’s not always what’s all smooth and tight. Certainly, looks get my attention. But, for me, what holds it and what’s most sexy begins between the ears.

Now that I’m over the stigma and (others) devastation of admitting my age, being this age doesn’t feel old. It doesn’t feel like anything, really. I still feel like I did twenty or thirty years ago, plus a few aches and pains. I know one thing, I will never lie about my age. If I’m lucky enough to be on the receiving end of a compliment, I’ll accept it gladly. Besides, my ego could never recover from the sting of fibbing and receiving an eye-roll.

So tell me, do you lie about your age?