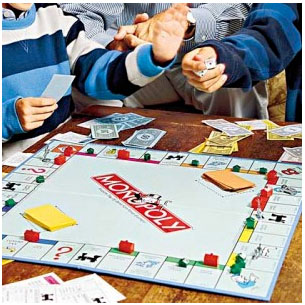 My father and I used to play silly games in the car on the way to school when I was little. “What number am I thinking?” he’d ask. And no matter what number I said, he’d exclaim, “You’re right!” And I would squeal with delight. Instinctively, I knew never to try this game with my friends–this was something special between my dad and me.

Some of my happiest memories were the summer mornings I spent with my dad in his office. Working (and I use that term loosely) side by side at his desk stapling, addressing envelopes, stuffing envelopes, simple age appropriate tasks for a young child that made me feel like I was contributing. My printing was practically illegible, but he never mentioned it. In his office I was safe from critical eyes of teachers or classmates with prettier penmanship. I worked hard and it felt good. My reward? A father-daughter lunch followed by a walk to the candy store where we chose dark chocolate covered marshmallows and honeycomb. Chocolate melted in our mouths and on our fingers under the bright heat of the sun as we made our way back to the office. We were a team.

My father died young–he was just 58. His illness appeared to have come on suddenly–Stage 4 Pancreatic cancer–when truthfully it had been brewing quietly for years. Faced with the devastating realization that at 58, he had just weeks to live, he tried to fill almost all his waking hours, when he wasn’t stricken with pain, sharing his fatherly advice to make up for all the years he would not be here.

What can you tell a sixteen-year old that she doesn’t already know? Usually not much, but his days were tragically numbered I didn’t want to leave his side and I hung on to every word and listened intently to his voice to always remember it’s timber.

I saw a side of him that was new to me. A stripped down raw version of the man I once knew. There would be no more pretense and no more fairy tales. There was no time to let lessons sink in and revisit at a later date. For us later didn’t exist. All we had was now. I could not bare the thought of not being with him every precious moment. And for most of the few weeks he had left I rarely left his side except to sleep.

Two weeks before his death, he had become mostly incoherent, with the occasional sudden clear declaration. One morning, when I should have been in school, but chose to stay at his bedside, he whispered, “My father never let me win when we played. Not once. Not at anything.”

Stunned by this rare personal revelation my heart ached in ways for him I didn’t even know were possible. My father, whose body was now wasting away and practically destroyed, had devoted his entire life to building me up and teaching me to be strong, while he himself was still hurting from old wounds. Even on his death bed he still put me ahead of himself and how I felt remained the most important thing. First thing each morning my father asked what day it was and even in his fog knew my birthday was just days away. His greatest concern became not that he was dying but that he shouldn’t die on my birthday.

In the morning on the day before my birthday he spoke so softly my mom, older brother, sister and me had to lean over him to hear, “I’m not speaking today. I need to save my energy.” His last gift to me was waking up the next day, on my birthday, and wishing me the last “Happy Birthday” I would ever hear from him. Shortly after midnight, once my birthday safely passed, my father took his last breath. We were a team.

My father’s words and devotion left a mark on me. Victories, real or imagined, mean so much to a child, and can help build the confidence to continue playing the game.

So with our own kids, we let them win… a lot. Their squeals of delight and the smiles on their faces were better than us winning any day. As they became school age we didn’t let them win every game. We slowly began to challenge them. By the time they were teens, we could play without holding anything back. Now 21 and 24, they cream us fair and square. And it feels good.

There has been a problem with your Instagram Feed.
Error: No posts found.