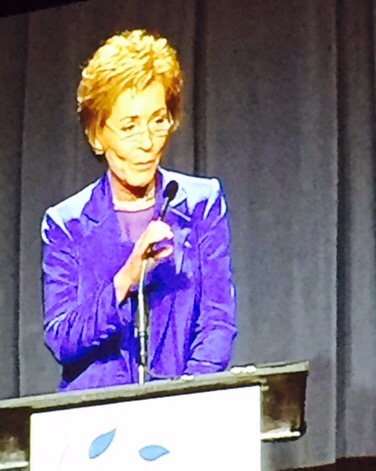 I recently had the opportunity to hear Judge Judy speak at a women’s event. I admit, I don’t watch The Judge Judy show which has been on air for 20 years, but I heard she is quite the character and a dynamic speaker, so I was eager to go. She did not disappoint. I left inspired from her life lessons.

Judith Sheindlin, otherwise known as Judge Judy, is a 72-year old fire cracker. A tough, honest, empowering woman who doesn’t take no for an answer. As I sat there listening to her, I thought  she couldn’t be more opposite of my mother.

As much as I adore my mother, I always wished for a stronger role model. My mom, a brainy beautiful pre-med student, dropped out of college when she met my father. Less than a decade later, Judy was one of the few women enrolled in her law school, yet believed she was just as good as any of her male competitors.

[Tweet “Find your passion, what you’re good at naturally, and find a way to make a living at it. ~ Judge Judy”]

I couldn’t help wondering what it would be like to have Judge Judy as a mother. No doubt, she would have given me her two cents on everything, as she says, tongue in cheek, she’s “always judging,” but comes from a place of honesty. But I imagine she would have been empowering, kicking me in the pants when I needed it and being a driving force in my life. I’m sure we would go toe to toe in some pretty nasty arguments, though living in a home where speaking up would be encouraged rather than discouraged and urged to be ladylike, sounds amazing.

Judge Judy shared since she thought she wasn’t conventionally beautiful, at least she would have brains, but was disappointed when an IQ text came back with average test results. Yet she didn’t let being “average” on paper change how she saw herself and limit what she would accomplish. When she says people may not like her, she says it’s not because she’s mean, it’s because she’s honest and is quick to add “You can be a tough broad and still be feminine, caring, and nice.”

She is author to several books, one of which is Beauty Fades, Dumb Is Forever: The Making of a Happy Woman, where she shares “Women,” she states with her trademark frankness, “need to wise up, stop subjugating who they are, and stop making stupid decisions in the name of love. They hide their talents and opinions so they won’t offend. They tiptoe through life letting others take credit for their ideas because they would rather be liked than respected. They spend their lives trying to please everyone but themselves, and then they wonder why they feel so frustrated and unfulfilled.”

For those of you who think over 50 is too late to start something new, The Judge Judy show debuted when she was just 52, and is still going strong. She attributes her success to tenacity, a passion for law, and a belief that she was just as good as anyone else. A belief that she admits sometimes gets her into trouble, but this fearlessness helped her succeed and become the woman who she is today. Her latest book is the inspiring What Would Judy Say: Be The Hero of Your Own Story.