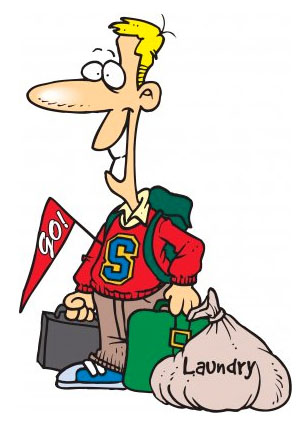 Thanksgiving, Christmas, Spring, and Summer break are when many parents of college age offspring, look forward to their student coming home with hope, excitement and a little trepidation. You hope you don’t say too much, ask too much, or commit the worse crime of all, give unsolicited advice.

It is such a strange and awkward dance that many parents find themselves in when their child/young adult comes home for vacation.  The college kid has been used to making decisions for themselves about what, when, where, and with whom, they eat, drink, sleep, study, etc…

Hopefully there will be some lively discussions about politics, or some other intellectual pursuit, and less wanting to fill in all the blanks (like, what have you been eating? have you been drinking? who are your friends?).  Things we’re better off not knowing.

And then they come home to rules, and really, it’s as if practically nothing has changed since they left. Often, little has changed, other than a lighter food bill and less laundry.  There may still be younger siblings at home, so there is a need for keeping the status quo.

The goal is that your college kid enjoys your company and would like to move back home one day. We hope!  So there is the delicate balance of enforcing rules and not being the ultimate “buzz kill.” You don’t want to scare them off, so he/she won’t want to come home next time.

Here’s some things I’ve learned in the trenches:

1. Let them sleep as much as they want the first few days (they’re sleep deprived from dorm living, late nights and just noise), because cranky isn’t fun for anyone. Staying out till the wee hours of the morning sounds awful to adults who have to get up early the next day, (and don’t take naps), but to kids it’s the norm in college.

2. Have lots of good food in the house, you know this is 100 times better than the stuff they eat at college…this can be good leverage.  If you can slide food under the door (especially during the first few days), so much the better. Fresh baked goods are premium.

3. Don’t be completely available. It puts too much pressure on them if they think they need to be with you every minute. Don’t feel guilty about it either. They probably want some time to just chill, see friends or just walk around the house or hang out in the pantry.

4. Spoil them, but don’t do everything for them.  Don’t underestimate the thrill of letting them get their own snack from the refrigerator.  Helping out too much can make them feel like a guest in their own home.

5. Did I mention give them space?  This is so hard, since you might not have seen them in months and it goes against the nature of being a parent, but you have to do it to keep the peace.

6.  Try not to speak too much or ask too many questions.  You’ll be amazed at the snippets of information that come your way, when least expected.

7.  Sneak in lots of hugs and kisses when the time is right.

Have any of your own tips for surviving  your kid’s college holiday breaks?