When I began blogging six years ago I never would have believed that one day my writing would be featured on one of my favorite parenting blogs: The Washington Post’s On Parenting. It is an honor and a dream come true to see my name on the page. (I’m still pinching myself!)

Parents of soon-to-be college freshmen, this one’s for you. Preparing your kids for college is no easy feat. The summer before college drop-off is often filled with drama and emotion. Even the most easy-going child can turn into an alien so they can begin the process of pulling away. As a mom who’s been there, done that, twice – here are my tips to help you navigate the sometimes treacherous waters of summer. With love, laughter, patience, and yes, biting your tongue the summer before they leave can be a time of joy and creating new memories.

This is what worked for me. Hope it works for you too… 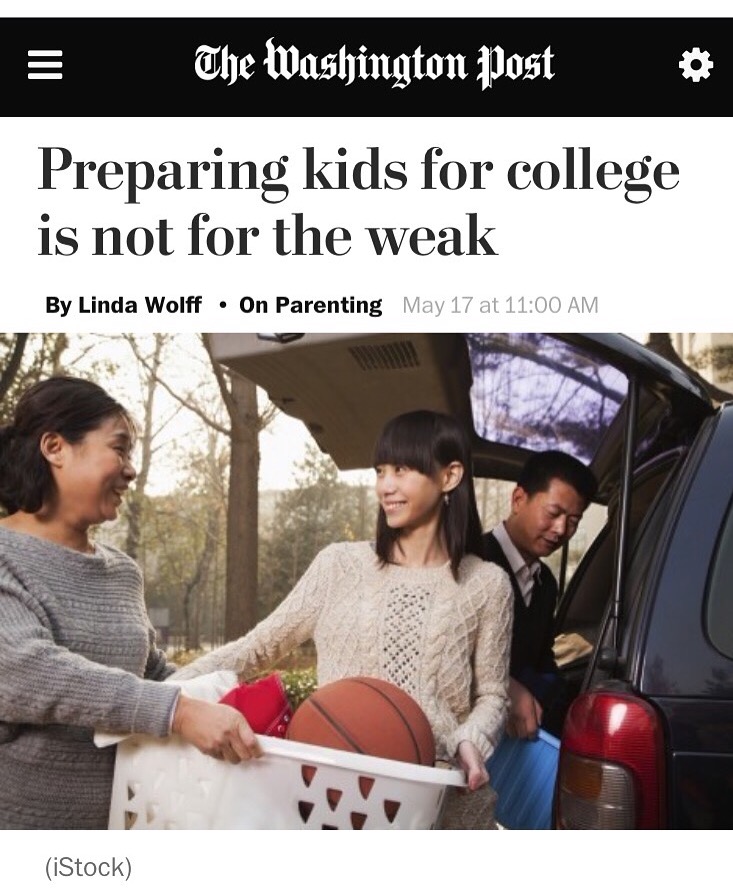 When my oldest child was applying to college, I asked him to pick a school in a big city with warm weather, because I planned on going with him. I meant it as a joke.

I think he took me seriously, though, because he chose a school in a small town, in the middle of nowhere, far away from me and his suburban upbringing in California. And at the time, there was neither a Starbucks nor a J. Crew in sight in Hanover, N.H. — which he and I both knew meant that I wouldn’t be either, except for visits.

He received notice of an early decision acceptance the second week of December, before school broke for the holidays, and after it came, I didn’t have a clue what to do. The only thing I knew was that at some point during the summer my son and I would be making a pilgrimage to Bed Bath & Beyond to stock up for his new life out of the nest.

As I made shopping plans, every mom, sister and friend of college kids couldn’t wait to chime in with their hard-earned advice. I trusted them, as they’d already spent time in the watching-their-kids-walk-away trenches. They told me to be sure he knew how to do the laundry and make his bed, because nobody was going to do it for him. They also said that space was tight in the dorms and urged me to buy him extra-long sheets, ultra-slim hangers and plastic storage bins for under his bed.

They reminded me to book a hotel for parent’s weekend (almost a year away) and nonstop flights for my son to come home for Thanksgiving.

I was excited for my boy’s new adventure, but filled with sadness at the thought of letting him go. I knew I would miss the day-to-day mundane parenting stuff — the bickering, the nagging, even the dirty dishes left beside the sink.

Wise friends told me to relax, that this is the way it’s supposed to be.

I wanted to believe them, but I had a hard time quelling my anxiety. Anxiety that was compounded by the frustration I was also feeling. Apparently, the summer before children leave for college, even the sweetest most even-keeled teenager can turn into a moody, sarcasm-spewing alien. Nobody warned me about that, and that is one small piece of advice I would have appreciated.

Every day during that fateful summer before school — which I first experienced with my son, and with my daughter three years later — I braced myself, not knowing who was going to find their way to the kitchen that morning: the loving child or a sulky teenager. My friends who were also the parents of new high school graduates reassured me that I had company in my misery, as their kids also pounded down the stairs hurrying off to meet friends, or slammed the doors shut to their bedrooms in the evenings, cutting off any conversation. All mixed up in my feelings of love and loss and confusion was relief that move-in day was near. I was shocked by their behavior and my not-so-stellar reaction to it, but it’s actually a normal one, according to F. Diane Barth, a psychotherapist and psychoanalyst

“Much of this storm of unpleasantness is your adolescent’s way of managing her or his own conflicting feelings about leaving the security of home,” Barth says. “Although they may be excited, they are also frightened and anxious, and unsure on how to manage this odd and confusing mix of feelings.”

She explains that although your child “may know that he is worried about being homesick, it is more likely that he simply feels irritable and eager to get away.”

Now that made sense. When my son bickered with me, or my daughter pushed me away, it was making it easier for them to fly their cozy nest. That thought helped me get through the rest of the summer until they left for school one early August morning.

Here are a few tips on how to slow down the emotional merry-go-round, because as psychologist Vijai P. Sharma says, the first year of college does not “just involve going away to college, it is also about leaving home.”

Schedule fun time: Try to schedule some fun activities that the whole family can enjoy such as traveling to a nearby town, having a picnic on the beach or one-on-one time with your child doing something they love, whether it’s hiking, museum hopping or just enjoying a movie night. Keep in mind that like your little bird leaving the nest, the summer is going to fly by quicker than you can ask, “Where are the freshman dorms?”

Allow friends first: Allow your children plenty of time to be with friends. After all, they will be leaving them behind, at least temporarily, and may feel sad and concerned that they may drift apart while apart. They may not want to share their fears with you, but will probably be comfortable commiserating with their compatriots who are starting off on their own adventures.

When he’s fishing for a fight, don’t take the bait: Arguments will flare up, but as hard as that may be, you need to bite your tongue so it doesn’t turn into a bloody battle. One way to deal with it is to be firm and maintain boundaries. Let your child know that he or she can voice opinions and even be slightly obnoxious, but that you draw the line at cruel, name-calling, insulting behavior.

Shop till you drop — together: I can attest that one of the best bonding experiences of the summer will be shopping with your child for the dorm. Listen to your children and take in their preferences, without censure. Our son, initially, had little interest in shopping with me, but agreed to pick out his own bedding and towels, and even managed to source a few cool items. When it came time to set up his sister for college, we shared a very different experience. She’d been decorating her fantasy dorm room ever since her big brother had started prepping for the SAT. We spent hours looking at catalogs, and even more time traversing the malls together. She ended up buying floral bedding, extra fluffy purple pillows and coordinating desk accessories.

Have a plan for the big day: Sit down with your children and plan the move-in day together so everyone knows what to expect. Cover every detail, including your exit time (both my kids felt it was best we leave after the afternoon orientation and before the dorm floor meeting). Offer to help pack, but try to keep them from packing up their entire closet, and be ready to give space if they need or request it. Also, sneak a little surprise into their suitcase — a favorite sweet treat or a framed photo from home.

And when that long awaited and dreaded day finally arrives on your calendar, you’ll want to be on your A-game — prepared, rested and ready to go with the flow. Stay organized, have snacks and bring tissues. Resolve to hold it together so you can be there for your kid. One more tip: Leave the dorm-room door open when unpacking so he can meet his neighbors. That’s also how you can meet the other parents. And did I mention knowing when it’s time to leave?

If you’re worried that your precious child will never want to come home to visit you again, put that thought out of your head. Most of them come home to roost again after graduating, if only for a short time, like my son, who is attending law school in our hometown. Who knows? Maybe he came back because I knew when to leave on move-in day.